What the Archbishop Should Have Said to Stephen Fry

What the Archbishop Should Have Said to Stephen Fry 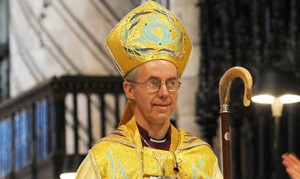 English homosexual activist and public atheist Stephen Fry has stirred the hornet’s nest with some juvenile comments about God and the Archbishop of Canterbury, in a speech defending religious freedom, has propped him up.

Fry was a guest on an Irish TV show when he was asked what he would say to God at the pearly gates if it turned out that God really existed after all.Fry responded, “I would say, ‘How dare you. How dare you create a world in which there is such misery that’s not our fault? It’s not right. It’s utterly, utterly evil. He added: “The God who created this universe, if he created this universe, is quite clearly a maniac, an utter maniac, totally selfish.”

This is, of course, an utterly sophomoric reply and only shows Fry’s ignorance of the subject of theodicy–the question of a good God and the existence of evil. Theodicy or Fry’s idiocy? The fact of the matter is that Christian theologians and saints have for ages struggled with this same question and their thought has produced the most profound and heart rending conclusions. My comment to atheists when they wish to engage me in debate is, “The internet’s a wonderful thing. I encourage you to do the research if you really want an answer. Libraries are good too.”

The Archbishop of Canterbury, Justin Welby then stepped up in Fry’s defense. He is right that Fry has every right to say what he wants, but how is it that the Archbishop can so amazingly miss the tone of the moment and the expectations everyone has of a religious leader?

The ABC should have said, “Mr Fry is entitled to his opinion, but he is a comedian not a theologian, and while his comments are, no doubt, heartfelt, they reveal his ignorance in this matter. God built into creation this marvelous thing called free will. We may do what we like. Mr Fry, for instance, may “marry” another man if he wishes. God, as a loving father, does not force us to do anything, but allows us to learn and grow. He takes risks so that we might develop into the beings he intends us to be. Consequently we get it wrong and evil proliferates. In ways we cannot comprehend all the suffering and evil in the world comes from this basic reality. The good thing is that God has also provided a way out–and the cross of Jesus Christ is the profound lesson that despite the greatest evil, all that is beautiful, good and true will triumph.”

I’m sure the ABC is a good chap. Pity he missed a great opportunity to evangelize and stand up for the faith.

Instead he comes across as having thrown a crust to the howling atheists at the gates.