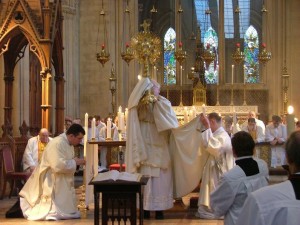 My latest article for National Catholic Register online reviews the disastrous consequences for church unity of the Anglican decision to ordain women priests and bishops.

If Anglicans proudly claim to be part of the ancient Catholic Church, why have they thumbed their noses at the Eastern-Orthodox and Roman-Catholic authorities over this matter? Many Anglicans consider their beliefs, worship practices, devotions and moral judgments to be Catholic. Anglo-Catholics pray the Rosary, go on pilgrimages, respect the Pope, follow Catholic devotions and believe in the real presence of Jesus Christ in the Eucharist.

Catholics are right to ask, “Why is there such a contradiction? Why do Anglicans claim to be Catholic and yet repeatedly vote to ordain women as priests and bishops?”

My eyes were opened on this matter as a young priest in the Church of England. It was the late 1980s, and the Anglicans were debating the question of women’s ordination. My own spiritual journey was taking me closer to the Catholic Church, and I had entered the debate with my colleagues. Together, we were asking the questions and searching for the way forward.

In conversation with a female theology student, I said, “I’m cautious about women’s ordination because the Catholic Church has said it would be a serious obstacle to unity. If we claim to be Catholic, how can we simply disregard the Catholic opinion on this?”

The young woman exploded in anger, “You don’t understand! I’m not a Catholic, and I don’t want to be!”

It is good to remember that the common Anglican comment, “We’re Catholic…just not ROMAN Catholic” is not only self deception, but it is a comparatively recent self deception.

Since Henry VIII’s break with Rome in 1534 the majority of the members of the Church of England were stoutly Protestant and firmly anti-Catholic.

In the seventeenth century there was some sympathy for Catholic tendencies in liturgy and literature amongst the so called Caroline Divines, but this was short lived and still firmly anti-Catholic for the most part.

Throughout the eighteenth century Anglicanism was robustly Protestant and it was only the second half of the nineteenth century with the growth of the Oxford Movement that some Anglicans started to cherish their Catholic heritage and attempt to re-fashion the Anglican Church as a “Catholic” church. Even then, when priests started to wear surplices (not even Eucharistic vestments) and put candles on the altar there were riots against such shocking papistry.

Everyone should be clear. The Anglican Church’s heritage and foundation is resolutely Protestant and anti-Catholic.

That they often seem Catholic in outward manners, dress and customs is nothing of substance.

As one wise woman has said when asked what the difference was between Anglican and Catholic….”The gap is not wide, but it is very deep.”