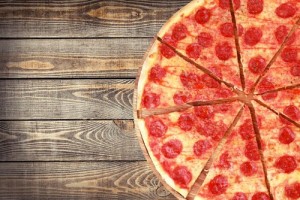 Ironic that a Mom and Pop pizza parlor on Main Street USA becomes the center of a media firestorm over religious freedom.

The Christian owners of Memories Pizza have been drawn into the firefight because of their sincerely held beliefs. They’ve had death threats and had to close down.

Who would have thought it: in Pizza Pie America–in the vast and ordinary homeland of Middle America. This is the world of pizza parties on Friday nights, high school football, girl scouts, the church choir and Little League baseball.

Where did it come from?

These are only the symptoms of the problem.

The root problem is atheism.

St Paul analyzes the situation very clearly. In the epistle to the Romans he writes:  (my comments in red)

The wrath of God Yes there is a wrathful aspect to God. Aren’t you justly angered by injustice, violence and abuse of the innocent? is being revealed from heaven against all the godlessness and wickedness of people, who suppress the truth by their wickedness, did you catch that? Sin suppresses the truth. When you choose sin you block truth since what may be known about God is plain to them, because God has made it plain to them.  For since the creation of the world God’s invisible qualities—his eternal power and divine nature—have been clearly seen, being understood from what has been made, so that people are without excuse. We call this general revelation: that even the simplest person can know that God exists from observing the wonders of nature. To do otherwise requires willful rejection of the obvious truth For although they knew God, they neither glorified him as God nor gave thanks to him, but their thinking became futile and their foolish hearts were darkened. They knew the truth, but the rejected it willfully.

Although they claimed to be wise, they became fools  and exchanged the glory of the immortal God for images made to look like a mortal human being and birds and animals and reptiles. We don’t see many monstrous pagan idols in our society. Give it time. Oh wait, what about that statue of Satan erected outside a courthouse in the mid West? What about the gruesome bestial make up of heavy metal rock stars? What about the recent Madonna rock video with half naked dancers wearing bulls horns?

Therefore God gave them over in the sinful desires of their hearts to sexual impurity for the degrading of their bodies with one another.  They exchanged the truth about God for a lie, and worshiped and served created things rather than the Creator the rampant consumerism and endless lust for entertainment is part of the problem—who is forever praised. Amen.

Because of this, God gave them over to shameful lusts. Even their women exchanged natural sexual relations for unnatural ones.  In the same way the men also abandoned natural relations with women and were inflamed with lust for one another. Men committed shameful acts with other men, and received in themselves the due penalty for their error.

Furthermore, just as they did not think it worthwhile to retain the knowledge of God, so God gave them over to a depraved mind, so that they do what ought not to be done. They have become filled with every kind of wickedness, evil, greed and depravity. They are full of envy, murder, strife, deceit and malice. They are gossips,  slanderers, God-haters, insolent, arrogant and boastful; they invent ways of doing evil; they disobey their parents;  they have no understanding, no fidelity, no love, no mercy.  Although they know God’s righteous decree that those who do such things deserve death, they not only continue to do these very things but also approve of those who practice them.

Understand that the rage and fury that lies beneath the rebellion against God will not be appeased. It is ravenous. It will seek a victim. It will prowl about looking for an innocent to devour. That’s what evil does. That’s why it’s evil.

Once the person, the group or the society descends into demonic madness there is no discussion. There is no dialogue. You will not be able to appease them even if you try. Nothing will satisfy the bloodlust.

That’s why it will end in mindless violence. That’s why innocent Indiana pizzeria owners get death threats and a high school coach calls for their business to be torched.

I don’t mean to be too alarmist. There are still far more good, decent, honest and simple people in America, but those who love God and love the good need to be alert and aware and be willing to speak up.

Whether we have the moral courage to do so is the question in my mind. We’re soft. I fear that most of us will give in to the zeitgeist…

…because most of us already have.