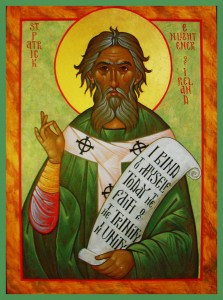 Some time ago I had a dream in which I saw a young boy swimming in a river.

As he was swimming happily downstream I saw that around the bend was a large crocodile.

I watched in terror as the boy swept past the crocodile and the beast slipped out from the undergrowth where he was hiding to follow the lad.

As he attacked I turned around to look for help. The croc had already devoured half of the boy.

As I turned around a large, bearded man dressed for English outdoor weather came striding up with a troop of children.

I thought they were boy scouts with their leader out for a hike.

He was dressed in green rubber boots and wore a big green jacket and carried a large walking stick.

In a jolly and boisterous way he clapped me on the back, stuck out his hand and said, “I’m Patrick!”

At that point he saw the crocodile and boy in the river and called out, “You there! Release him!”

The boy was immediately released and swam up to join Patrick and me and the other children.

I woke from the dream and realized why the legend of St Patrick says he drove all the snakes out of Ireland.

He didn’t drive snakes out of Ireland. He drove the great dragon and all the little reptile demons out of Ireland as he preached the gospel of repentance and faith in the one who has dominion over all the creatures of the dark.

I understood that Patrick was a great exorcist. The crocodile was the great dragon and Patrick’s prayers delivered the boy from the gullet of the beast.

The next day I went out and bought an image of St Patrick which I keep in my oratory, and when praying for deliverance for my own sins or saying prayers of deliverance for others will always invoke powerful St Patrick.

This is a true story of a dream I had and the realization of the power of the intercession of the great saints. We so often forget their presence and their power. They are doing God’s work even though we can’t see them, and it is important to include them in our prayers and in our Catholic life.

It is important also to be aware of the influence of the demonic in so many little ways. We so often think that the only kind of demonic influence in human life is the kind of demon possession we see in horror movies like The Exorcist.  Not so. The vast amount of demonic influences are tiny. They are like demonic infections. In some way a door is opened and we say “yes” to an evil spirit, and that “yes” remain in our life like a little black shadow.

If you are aware of this in your life don’t be afraid of what I call “self deliverance”. When you bless yourself with Holy Water at Mass say, “I renounce Satan.” Use the St Benedict medal. Keep it on your rosary or in your pocket as a reminder. When you say the Lord’s Prayer focus on the phrase, “Deliver us from evil.”

And remember St Patrick and the Mother of God, Mary Most Holy.

After your prayers add, “Holy Mother of God….Pray for Us. Powerful St Patrick…Pray for Us.”