Satan and the Banality of Evil

Satan and the Banality of Evil 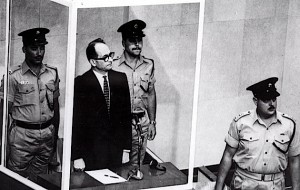 An article in the Daily Telegraph reports on a new film being made about the man who televised the trial of Nazi death camp criminal Adolph Eichmann.

Eichmann was the chief organizer of Hitler’s “final solution” to exterminate the Jews.

As the Nazis began the invasion of the Soviet Union in 1941, their Jewish policy changed from emigration to extermination. To co-ordinate planning for the genocide, Heydrich hosted the regime’s administrative leaders at the Wannsee Conference on 20 January 1942. Eichmann collected information for Heydrich, attended the conference, and prepared the minutes. Eichmann and his staff became responsible for Jewish deportations to extermination camps, where the victims were gassed. After Germany invaded Hungary in March 1944, Eichmann oversaw the deportation and extermination of that country’s Jewish population. Most of the victims were sent to Auschwitz concentration camp, where 75 to 90 per cent were killed on arrival. By the time the transports were stopped in July, 437,000 of Hungary’s 725,000 Jews had been killed. Historian Richard J. Evans estimates that between 5 1⁄2 and 6 million Jews were exterminated by the Nazis. Eichmann said towards the end of the war that he would “leap laughing into the grave because the feeling that he had five million people on his conscience would be for him a source of extraordinary satisfaction.”[1]

After he was captured in Argentina in 1960 and smuggled out of the country by Mossad agents to stand trial in Israel. The televised trial was viewed widely and one of the books by Hannah Arendt Eichmann in Jerusalem: A Report on the Banality of Evil (Penguin Classics)

coined the phrase “the banality of evil.”

The phrase stands Satan on his head because he is usually portrayed as a dashing figure, a charming character who is often more shrewd and debonair than the boring good people. The phrase reminds me of the stupid utterance by atheist science fiction writer Isaac Asimov, “Whatever the tortures of hell, I think the boredom of heaven would be worse.”

Asimov clearly had no real idea of either good or evil. He could not grasp the sparkling, multi faceted, never exhaustible delight of goodness, truth and beauty, nor did  he really grasp the banality and boredom of evil. Asimov’s sophomoric and empty observation only indicated the paucity of his own moral imagination. Like so many atheists his brilliance and erudition and talent in his own field blinded him to his ignorance and arrogance in the fascinating field of religion.

Anyone who has sat and heard confessions is well aware of the banality of evil. Sin is dull. There is nothing original about it and there is very little that is creative or new about it. Continue Reading