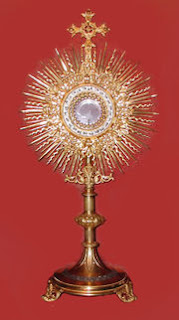 Thirteen years ago I stood at the altar as an Anglican priest in my beautiful medieval church not believing what I was doing.

I had come to believe in the real presence of Our Lord’s Body and Blood in the Eucharist, but it was not present in my church, but in the chapel of the Benedictine Quarr Abbey. Put very simply, Jesus was there in a way that I did not believe he was present when I celebrated the Anglican Eucharist. People asked how I could sacrifice everything to become a Catholic. It wasn’t hard. How could I have continued for another thirty years as an Anglican priest standing at an altar doing something I no longer believed in?

So, in 1995, my wife and two infant children and I were received into full communion with the ancient, one, holy Catholic and Apostolic Church. We left our rambling Victorian country vicarge and two magnificent medieval churches for a small house, a job with no future and a Catholic church where we did not feel at home. I applied to be ordained a priest, and completed my training, but for one reason after another it never happened. After ten years I had a dossier with letters from a cardinal, an archbishop and four bishops all saying I should be ordained, but no one did anything about it.

Then in the summer of 2005 an advertisement appeared in the National Catholic Register for a chaplain to St Joseph’s School in Greenville, South Carolina. Greenville was my home town. My family was there, so I wrote to the school from England saying, ‘You will need some creativity to entertain my application. You want a Catholic priest. I am not a priest, I am married and I live in England.’

That summer I flew in to interview for the job. In the winter of this year I spent three months at the school as a lay chaplain. We sent the paperwork to Rome for a dispensation from the vow of celibacy. In March I was offered the job. In May we sold our house in England. In June we moved to South Carolina. In July the rescript came through from Rome. In September I took my written theological exams. In October I took my oral exams. In November I was ordained deacon, and tomorrow I set out on my ordination retreat, after which I am to be ordained priest on Thursday night.

Thursday night will be a wonderful harvest. Many strands of the past are coming together. My mother will be at the ordination Mass. With her, at the age of five, I first ‘accepted Jesus into my heart.’ I will be ordained as a Catholic priest just two miles from Bob Jones University where I first moved away from Evangelical fundamentalism. Just a few hundred yards away is the little independent Anglican church where I took my first steps toward the ancient church. With me will be my English wife and her parents…friends and family who first believed in my ministry as a priest, and who never wavered in their belief that one day I would be ordained as a Catholic priest.

It has been a long, difficult and exiting adventure of faith. At times I felt like giving up altogether. Prayer was empty, the Mass seemed empty. God seemed silent. I felt abandoned. At times all I could do was gaze at the host and wish that it was Jesus Christ and cling to my belief that he really was present there.

Forgive the self centredness of this post, but if you are reading this, and you are confused or frustrated or exhausted in the spiritual life, never give up hope. Allow me to speak from experience: God knows what he is doing. Trust in God. Trust in God. Trust only in God, and everything else will be added to you.