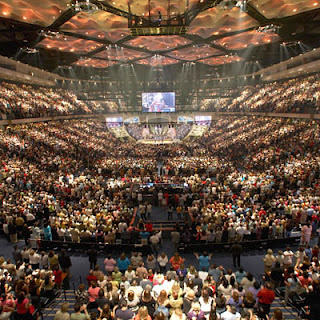 A friend pointed out recently that in terms of numbers, most good sized suburban Catholic parishes would qualify for ‘mega church’ status. With thousands of worshippers each week, they compare nicely with your run of the mill ‘mega church.’

But when you look at the Catholic Church globally and down through the ages it is the mega church to make all contemporary mega churches look dinky. Popes draw crowds in the millions. Here’s a church of a billion souls and growing, and when you count all the Catholics down the ages the auditorium pictured here wouldn’t hold a fraction of them. Do you want to join a mega church? The Catholic Church is the one.

One of the things that interests me about the mega churches is the way they use sensory tools for worship. Protestantism was always known for its bare preaching halls, austerity in worship and lack of physical aspects of worship. Not anymore. The mega church has pounding music, huge screens, dry ice smoke, action on stage, drama and even processions. Are they unconsciously copying Catholic worship? When Catholic worship is truly populist and integrated into the culture (the way mega church worship is) it did all this stuff too. In the middle ages the big cathedrals not only gathered crowds, they inspired and educated the crowds. If you like, the great stained glass windows served the same function as the big plasma screens. They entertained, educated and inspired awe in the worshipper. The processions, the passion plays and street drama, the fiery preaching and dramatic sensual worship was all Catholic before it was a Protestant mega church thing. Geesh, we even had light and smoke effects with incense and candles before their dry ice machines and laser shows.

In the meantime we Catholics have done one of two things: if we’re modernist Catholics we’ve made our worship and churches just about as Protestant as possible. We’ve stripped out the statues and vesments and processions and tried to get rid of populist sensory worship. On the other extreme, if we’re traditionalists, we long for the old days of sensory worship, but we’ve become antiquarians, with exquisite taste in archaic liturgies, remote rituals and beautiful, but elitist music. We’ve turned what was a populist religion into a preserve for dainty young people with fine taste and an interest in medieval pomp.

I wonder what real populist, sensory, traditional Catholic worship would look like. Could we use plasma screens to aid devotion? Are they evil in themselves? Instead of showing zippy zappy images, why couldn’t they show the masterpieces of Catholic art before prayer. Could Catholics use new technology and combine it with ancient traditions? Why shouldn’t a plasma screen show images from The Passion of the Christ as icons for meditation while the rosary is being said? Couldn’t we use the wonders of lighting to create worshipful and inspiring focus for worship? What about other aspects of worship and devotion? Maybe we should commision new mystery plays. Why shouldn’t they be operas or musicals? Could we make short films that would be used to prompt meditation? Is recorded music always wrong for devotional purposes? Could we use all these things plus traditional candles, incense, vestments and icons?