Thundering Through With St James

Thundering Through With St James 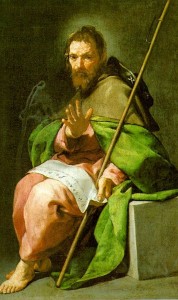 Here is my latest article for Catholic Exchange. It’s unlocks an interesting detail about St James and the dating of the New Testament.

Bible scholars piece together details of evidence to build up a full picture of the New Testament authorship and dates. Their work is like that of a detective—picking up a hint here and a scrap of evidence there.

There is an interesting detail about St James which helps date the New Testament accurately. It appears in the work of Justin Martyr. Justin was one of the early Christian writers called the Apostolic Fathers. He lived from 100-160 AD only one hundred years after the death of Jesus. A convert to the church, he wrote various works defending the Christian faith. One of the details he recorded is this:

“It is said that he [Jesus] changed the name of one of the apostles to Peter; and it is written in his memoirs that he changed the names of others, two brothers, the sons of Zebedee, to Boanerges, which means ‘sons of thunder’….”

What are Peter’s “memoirs”? We know it isn’t the Gospel of Peter–which is a later apocryphal gospel that was written long after Justin Martyr died. The early tradition of the church was that John Mark was the companion, translator and scribe for Peter, and that Mark’s gospel is based on the memories of Peter himself.