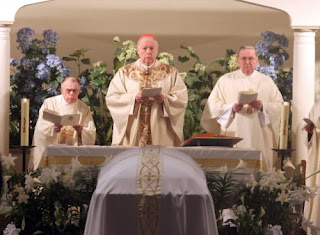 A friend of mine called recently to vent about the awfulness of his parish. He attended a funeral where, instead of the homily, gave a pretty lame eulogy about the deceased. The poor woman was not actually a very pleasant or sociable individual, and of course Fr Folkmass went on and on about how popular she was. Then he invites the family to say a few words about the dear departed and nobody can think of anyone to say. My friend was cringing as the old duck’s brother stood up and told a couple of childhood stories about how the departed dealt with her weight problem. So it went from bad to worse.

Why, oh why, do Catholic priests have so little understanding of what liturgy is about? A funeral Mass is not primarily a memorial service. A funeral Mass is not first and foremost an opportunity to comfort the bereaved. A funeral Mass does something. In it the Church offers the sacrifice of Calvary for the repose of the soul of one of her departed sons or daughters. The funeral Mass is an action of the church which applies the benefits of Christ’s atoning death to the soul of the deceased. The funeral Mass is a solemn rite of passage in which the Holy Church hands on to God the soul of the departed and commends his body to the ground or to the flames.
This is what a priest should be doing at the Mass. At the wake, by all means, get Uncle Harry to tell a few ripe stories about the old rogue. At the reception have a few drinks and get everyone to reminisce about the good times and the bad times, but not at the funeral. Another friend in England told me about a funeral he attended where Ernie (the deceased) was an unpleasant alcoholic with no particular gifts. When the family was asked to say a few words, his son Sid stood up and said, “My Dad loved to watch football on telly. Every Friday night he bought ten lottery tickets, then went down the pub and downed ten pints. He liked his beer, did my Dad.” Then he sat down. That was it. There’s nothing in the world wrong with being an ordinary fellow from an ordinary family, and the sadness and waste of alcoholism is awful, but such sentiments at a funeral don’t exactly inspire or uplift anyone.
When we resort to eulogies at funerals we do not do the departed any favors. The liturgy should raise the departed to the dignity of the son or daughter of the King. HadJust as no one should eulogize the simple soul who did nothing much with their life, so no one should eulogize the great person who accomplished much. In death they are equal. The funeral liturgy should be done straight up. Say the Black. Do the Red. In this way the solemn liturgy elevates the humble and humbles the great.

And another thing: funerals are meant to be sad. Black should be worn. Dignified grief should be encouraged. A funeral is not a ‘celebration of Stanley’s life’. A funeral is not ‘a time of joy because Mildred is in heaven now.’ How tacky and trite is that? No. A funeral should be sad. Someone had died for goodness sake. Furthermore, people need to grieve. They need to work through the terror of death. They need to face reality. A solemn, sad, sober and serious funeral helps them to do that. A silly, shallow, superficial and stupid memorial service or ‘celebration of Pat’s life’ only encourages them to look the other way and take a feel good cop out from reality.

No. Give me the funeral march. Give me solemn young men in black with serious faces to mourn my passing. Give me widows and women in black veils and gloves wiping away tears. Give me the smoke of incense to purify my bones. Give me the water of life to remind me of my baptism. Give me a requiem Mass and may all who are there–whether a multitude or the faithful few–grieve me with the dignity in death that I once hoped for in life.
PatheosDwight2009-05-05T21:15:00-04:00May 5th, 2009|Categories: Patheos|0 Comments