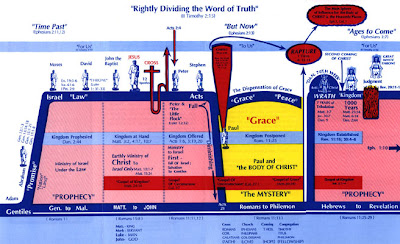 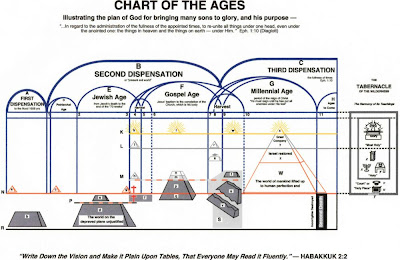 Here are two timelines. The first one is a dispensationalist timeline. The outline of world history here is embraced by a huge number of American conservative Evangelicals. They’re the ones who buy into the whole hugely successful Left Behind series of books and films produced by Bob Jones graduate Tim LaHaye (and others)

The bottom chart is a timeline produced by Jehovah’s Witnesses. I haven’t looked at them in much detail, but they could pretty much be interchanged.

If such large numbers of American evangelicals buy into this stuff [which was produced pretty much at the same time and by the same sort of religious freelancer. Charles Taze Russell (founder of Jehovah’s Witnesses) and C.I.Scofield (author of the dispensationalists handbook, the Scofield Reference Bible) were pretty much cut from the same cloth.] Shouldn’t we be worried about what else they believe? How close are these people to ‘the faith once delivered to the saints’?

Here’s the really crazy thing: these are the two religious groups who love to accuse Catholics of adding late, human-invented doctrines to the ‘faith once delivered to the saints’. Isn’t that just a genuine kick? A huge part of their belief systems were invented by one-man-and-his-Bible amateur Bible students in the beginning of the twentieth century in the United States, but they accuse Catholics of making stuff up.

C.I.Scofield and Charles Taze Russell (and Mrs Baker Eddy and Joseph Smith etc etc etc) are the logical result of the founding Principles of Protestantism. You think the Bible is simple enough for any plowboy to understand? Then plowboys (and unemployed drapery store workers and down on their luck snake oil salesmen and neurotic unhappy housewives) are what you will get as your ‘Bible scholars’ and ‘Church leaders’

The really ironic thing about all this is that the plowboys of this world don’t want the Scriptures to be transparent and easy to understand. It is the bishops and saints and missionaries who proclaim a simple gospel. The plowboys are the ones who turn the Scriptures into a sourcebook for arcane theories, deeply mysterious symbolism of the end times, complicated symbolical and numerological systems and obscure systems for prognosticating about the future.

I’m sure the Devil’s greatest triumph at the Reformation was not getting rid of one Pope, but setting up a system whereby there would be thousands of popes.