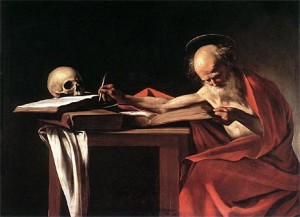 This week has long been one of my favorites in the church year. Who can resist the sweetness, purity, power and goodness of all these saints and angels celebrated in one week!

September ends with the celebration of the great heavenly warrior St Michael, and he is followed a day later by St Therese of Lisieux who everybody loves. Then as if to celebrate her Little Way of spiritual childhood further we pile on the Feast of the Holy Guardian Angels, then a day later more super attractive sweetness in St Francis of Assissi. Michael, Therese, Guardian Angels, Francis…it’s almost too much for those who love the Lord and love his saints.

But hang on. Stuck there between St Michael and St Therese is Jerome.

He’s there like one of God’s great jokes in this most holy week.

Jerome? Jerome the patron saint of curmudgeons? Jerome the misogynist grump? Jerome the not politically correct, intellectual who didn’t do small talk and was (to put it mildly) not inclined to suffer fools gladly?

Born around the year 340 Jerome began a scholarly life from an early age. He studied at Rome and Trier, retired to the desert to live in a cave, made friends with St Gregory Nanzianzus, Pope Damasus and at the same time made lots of enemies. He not only translated the Bible into Latin, but wrote controversial essays, theological works and was a translator. He  ended up living as a monk in Bethlehem, dying at the age of 80.

Jerome was kind of like the Michael Voris of his age. He attacked just about everybody for anything. He was at heart an extremist, a radical ascetic and a recluse. We must remember that in the late fourth century Christianity had become the official religion of the Roman Empire. The early days of austerity, persecution and being an underground movement were over and the church had to cope now with the problems of worldliness.

So Jerome wrote of the nice Christian, but worldly matrons who “paint their cheeks with rouge and their eyelids with antimony, whose plastered faces, too white for human beings, look like idols; and if in a moment of forgetfulness they shed a tear it makes a furrow where it rolls down the painted cheek; women to whom years do not bring the gravity of age, who load their heads with other people’s hair, enamel a lost youth upon the wrinkles of age, and affect a maidenly timidity in the midst of a troop of grand children.”

He also didn’t have much time for poncy clergy who fuss over their clothes. In a letter to Eustochium he writes with scorn of certain members of the Roman clergy. “All their anxiety is about their clothes…. You would take them for bridegrooms rather than for clerics; all they think about is knowing the names and houses and doings of rich ladies.” Indeed. They are with us today–cissy priests who spend all their time fussing over pretty vestments.

Jerome’s style was caustic, sarcastic and harsh so he made lots of enemies. They returned the attacks, gossiping about his relationship with the holy women who surrounded him, mocking his gait, his smile and his accomplishments.  Continue Reading