Prophecies for our Time

Prophecies for our Time 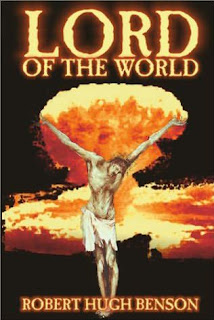 As we enter the new year, and naturally look to the future, think again of the struggle that is going on all the time between the Church and the powers of darkness. This review of Benson’s The Lord of the World by my friend Fr. John McCloskey is a grim and sure reminder that we “wrestle not against flesh and blood, but against principalities and powers and the forces of wickedness in high places.” The best thing about the review is an extended quotation from Newman about the great apostasy–which is putting personal experience above truth.

So Bl. John Henry Newman writes: (and remember Newman’s writing is eloquent and dense–so it is worth reading and then re-reading)

Is there not a vigorous and united movement in all countries to cast down the Church of Christ from power and place? Is there not a feverish and ever-busy endeavor to get rid of the necessity of Religion in public transactions? … An attempt to educate without Religion? —that is, by putting all forms of Religion together, which comes to the same thing… An attempt to make expedience, and not truth, the end and the rule of measures of State and the enactments of Law? An attempt to make numbers, and not the Truth, the ground of maintaining, or not maintaining, this or that creed, as if we had any reason whatever in Scripture for thinking that the many will be in the right, and the few in the wrong? … An attempt to supersede Religion altogether, as far as it is external or objective, as far as it is displayed in ordinances, or can be expressed by written words — to confine it to our inward feelings, and thus, considering how variable, how evanescent our feelings are, an attempt, in fact, to destroy Religion? Surely, there is at this day a confederacy of evil, marshalling its hosts from all parts of the world, organizing itself, taking its measures, enclosing the Church of Christ as in a net, and preparing the way for a general Apostasy from it.


Now, and in the years to come we will see an increasing clarity in this struggle. Protestantism will move away from any pretense of being a supernatural religion. It will become one of three things: a dry exercise in fundamentalist Biblical exegesis applied in practical ways or it will be a superficially exciting blend of self help teaching and inspiring religious feelings or thirdly, it will be a fellowship of religiously inspired social activists. What it will not be is a supernatural religion claiming supernatural authority instituted on earth for the salvation of souls.

Catholics will also become clear about their mission. Those who have turned Catholicism into an inspiring self help program or a fellowship for social activism will die out. Their shallow religion will prove to be no religion at all, and those who desire this false religion will go to the Protestants where it will be done more effectively and efficiently. This new religion (which will grow out of Protestantism) will increasingly become the religion of the state. The anti-Christ state will realize that some religion is better than no religion at all, and as the Chinese have established a false Catholic Church, the American people will increasingly follow this hollow form of ‘advanced’ Protestantism.

The most insidious form of this new religion will be the evolution of ‘conservative’ Evangelicalism. It will lose it’s Biblical roots and lose any sense of objectivity in moral or doctrinal teaching. The leaders will eschew all denominational affiliations and choose instead to graze among all the Christian teachers–taking a tradition here, a doctrine there, a worship practice here and a moral teaching there. Each one will be, even more than they have been in the past, a law unto themselves. Individual opinion and subjective sentiment will be their only guide. They will not be limited to Christian teaching, but will adopt and adapt Eastern religious practices and New Age practices as they seem to fit, and they will do so with slick marketing, high technology and attractive communication techniques.

As the old ‘liberal’ Protestantism dies out their social activism and moral laxity will be absorbed by this new syncretism. Trendy mega church pastors will make headlines for their work with the poor and their courage for setting up a church in the slums. They will campaign for women’s rights and homosexual liberation. They will trumpet ‘forgiveness’ after divorce and remarriage, will admit that “sometimes abortion is a necessary solution to a difficult problem” and they will espouse contraception and overlook fornication and co habitation as “The way things are now.” In other words, they will adopt all the positions of what we now term “liberalism” and they will do so while still wearing the coat of the “Evangelical Conservative.” They will simply say they are “compassionate Conservatives.”

In the midst of this, Catholicism will stand out as the only supernatural religion that remains. Because of this they world (and the false religions of the world) will join forces to oppose the Catholic faith. This situation will not be different than it has always been in the world.

It will simply be more obvious and transparent.