Something in Me Loves the Desert

Something in Me Loves the Desert 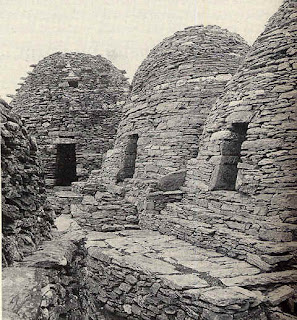 Picture here the hermitages on Skellig Michael, and why is it every Lent do I want to hunker down and be a hermit? There’s something in me that wants the cave, the cloister, the solitary cell. I want to close the door and curl up with a pile of good books and get away from all the hustle and hurry of this old world.


Something in me loves the desert. At one point I was ready to join the monastery, but does it sound too arrogant to say that I didn’t because I thought for me it would be too easy? That is to say, at first appearance it seemed too easy. What, do you mean I could live in a place with a bunch of other guys who also don’t like small talk? Bliss! I could have my own little room and close the door and nobody would bother me? Heaven! There would be a great big library and I would actually be encouraged to put my nose in a nice dusty old book and keep it there? Nirvana! You mean there would be a big church and beautiful liturgy and I could mind my own business and not have to listen to the endless chattering and mindless moronic music of this busy world? Sign me up.


Then once I went a different path I realized that had I chosen the other path and been one of the boys in black (for it was the Benedictine monastery I would have joined) God would not have let me off the hook. I would have had to learn to love my brothers, and perhaps that would have been the hardest task of all, for undoubtedly some of them would have been just as grumpy and misanthropic and difficult to love as I am. In other words, by avoiding the world of men, God, with his infinite sense of humor, would have landed me in a world of men  just like me, and that would have been a just punishment and a hilarious game.


This is why our holy father St Benedict says that a man may only be a hermit after he has spent many years in the monastery learning to love his brothers, for how can we love God who we cannot see if we refuse to learn how to love our brothers and sisters who we can see? This is why there are two commandments: love God and love your neighbor and the two commandments are one, and this is why the Christian faith (even for hermits) is never totally solitary.


Nevertheless, when Lent rolls around the hermit in me comes out of his cell and stands stroking his long beard, looking at me with a wise and wry smile on his face. He’s wondering if I have forgotten the call. I see him and wonder if somehow before the final act I will still turn up, like some old dream badly formed, at a monastery somewhere in England, and maybe I will be there singing the psalms and observing the beautiful ancient round of life, and maybe by some roundabout way of providence the lessons I would have had to learn in the monastery will have been learned outside the monastery, and by some great grace and pitiful co operation of my own the end point will be the same.


Then I will have “arrived where I started and know the place for the first time.”