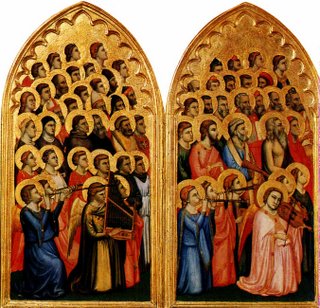 I was a young Anglican priest and Father Richard was a venerable old man who had sacrificed much and suffered much as a priest. We had daily Eucharist in our parish at 8am, and on winter mornings the light would slant in through the stained glass set in the ancient stone walls. Very few people would venture out for the eight o’clock service. One Monday, later in the afternoon I met Fr. Richard and asked if there were many there for the morning service.

His eyes lit up with joy and he said, “Oh, yes, millions!”

He was able to see what most of us only believe in theory, that round the throne of the altar circle ten thousand thousand hosts of heaven. The throne of the altar has a direct and instantaneous link to the throne of the Lamb of God. The saints and angels present there are not absent from our worship here below. They are with us and around us as “so great a cloud of witnesses” All Saints Day is our annual celebration of a daily and eternal reality.

Can you stand on your head and see the whole show as it really is? This vain and flashy world that seems so real to us is just a slide show, full of sound and fury, but only one dimension compared to the other side. Heaven is not less real than this world, but more real. The saints and angels are not less real than people here, it is the people here who are insubstantial, shallow and see through. The saints are solid, radiant and four dimensional. The reason they are not real to us is not because they are emphemeral, but because we are.

C.S.Lewis captures this in his story The Great Divorce. There each blade of grass cuts like a sword, the raindrops puncture the insubstantial souls and each apple is too heavy to lift. Dr. Therese Martin (otherwise known as the Little Flower) saw a similar vision: “In heaven”, she wrote, “each grain of dust is a diamond!”