Why I Did Not Ban Girl Altar Servers…

Why I Did Not Ban Girl Altar Servers… 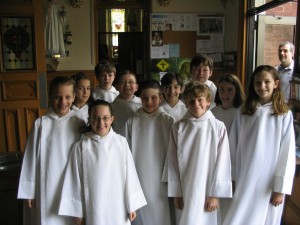 …even though everyone thought I was going to.

Meanwhile on the West coast Fr Illo–A priest in San Francisco has made the headlines this week for banning girl altar servers.

Was he right to do so?

He certainly has the right to do so, and I respect his reasons for making the decision.

When I served as chaplain to the local Catholic High School I didn’t exactly ban girl altar servers. I only had one or two and they graduated.

I didn’t replace them. Instead I asked the girls to serve as sacristans and lectors. They helped maintain the liturgical items, helped set up for Mass and did all the readings.

The boys served at the altar.

I made this choice because both girls and boys should have the opportunity to serve the Lord, but in different roles.

When one of the grandmothers of the school girls complained I explained that the high school girls themselves were very matter of fact about it and said, “You know Father, we don’t HAVE to do everything boys do. We’re good with it.”

They were bright, confident young women and neither their self esteem or trust in God was dependent on whether they were allowed to do everything boys did or not

Their comment exposed an interesting point about feminism: by striving to do all the jobs men and boys do aren’t the feminists automatically accepting the idea that what the boys and men do is superior? My high school female students were better than that.

When I took on the job of parish priest I found that there was already a committed group of boys and girls serving at the altar.

The whispers went around the parish that “Fr Longenecker was going to ban altar girls.”

I didn’t, and here’s why. Continue Reading