Why I Wear My Biretta

Why I Wear My Biretta 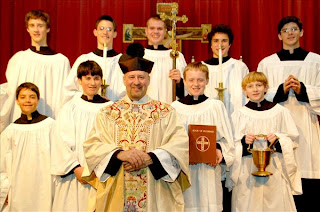 An email from a worthy person in England reveals this website which rather whimsically promotes the birettas they make by hand. I think Mantilla the Hon will have something to say about this development shortly, but in the meantime allow me to tell you why I wear the biretta.

One Sunday after Mass a great big Italian guy, maybe in his mid sixties, comes up and gives me a bear hug. Then after the clinch he looks at me and I see there are tears welling up in his eyes. “Faddah, ya wore da hat.” He’s choking back some real emotion here.

“You mean my biretta?”

“Yeah. Ya wore da hat. I ain’t seen the hat since the priests used to wear them when I was a boy and it brought back all the bewdiful memories. Tanks for wearing the hat.” And off he goes.

I don’t even know his name. I call him Luigi.