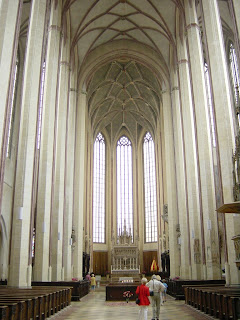 I know a young priest who was brought up as a Baptist. He went into a beautiful old Catholic Church during the liturgy. This was a classic neo-Gothic church with stained glass windows and a beautiful liturgy. He fell to his knees and said that he knew then and there that he not only needed to be a Catholic, but that he was called to be a Catholic priest. He’s not the only one. I know two other guys who eventually made the same decision for the same reason, and numerous other converts who were drawn by the beauty and reverence of worship including the reverence evoked by the beautiful church.

The unknown architect of Glastonbury Abbey in England wrote, “I want to create a church so beautiful that it will move even the hardest heart to prayer.” Can a beautiful church produce vocations to the priesthood? Perhaps we should reverse the question and say, “Does an ugly church discourage priestly vocations?” To answer the question we must think through, and come up with a theory of aesthetics and think through the reasons for both ugly churches and beautiful churches. Once we understand the mentality behind both we will be able to answer the question of whether a beautiful church can help produce new vocations to the priesthood.

The modern churches we deem ‘ugly’ are usually designed from a utilitarian point of view. Modern architecture has taken as it’s creed Frank Lloyd Wright’s dictum, “Form follows function.” Therefore most modern architechts, when considering the building of a church will ask, “Where will everyone sit. What kind of an artificial sound system should we install? Where will the heating, air conditioning and toilets go? Where will the Sunday School rooms go? What about disabled access? Do we need elevators?” All these practical and utilitarian questions must, of course, be answered, but if they are the only considerations you will end up with a practical, inexpensive and ugly building. You’ll end up with a building that is simply an auditorium.

Then, of course, Catholics will want their church to be ‘pretty’ so they’ll spend lots of money adding a layer of gloss. They’ll throw in some marble. They’ll buy some second hand stained glass windows from an old church in Ohio or somewhere. They’ll add a nice tabernacle or some statues. That’s all well and good, but the building itself is still probably an ugly, utilitarian, cheaply built structure.

We then have to ask what these churches say about the faith, for the church building is a sacramental. It states what we believe. A building, whether we like it or not, is a statement of our values, our faith and our world view. A cheap building with no inner integrity of beauty–a cheap building that is ‘dressed up’ to look Catholic or ‘pretty’ with decorations is superficial and shallow and only skin deep….just like our faith too often I’m afraid! In our superficial, face lift world we build churches that are superficial where the ‘beauty’ is really on ‘pretty’ and skin deep.

What about the liturgy that goes on in such buildings? Too often it also is superficial, sweet and comfortable and skin deep. Does such liturgy and do such buildings inspire vocations? Do they say to our young people, “Look what sacrifices we have made to worship God?” Do they say, “We have given all to build something beautiful for God”? or do they actually say, “It’s okay to give God second best. It’s okay to give him what’s left over.”? Do they come out of the building yawning and wondering what next for Sunday or do they come out full of awe and thankfulness for the beautiful worship of God?

A beautiful church, that required great sacrifice to build, on the other hand–combined with beautiful liturgy and an awesome and reverent worship of God is more likely to inspire the reverence and awe and sacrifice required of our young people who are thinking about a vocation.