Our Lady of Glastonbury

Our Lady of Glastonbury 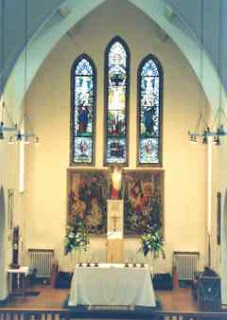 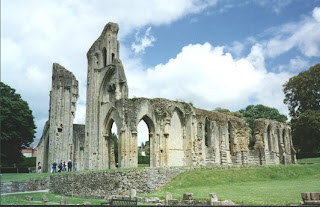 Bare ruined choir of Glastonbury–one of the largest and most ancient monasteries in England. It’s last Abbot, Richard Whiting, defied wicked King Henry and (although he was in his eighties) was taken to the top of Glastonbury Tor and hung, drawn and quartered. Read more about his martyrdom here.
Glastonbury was also the home of the most ancient Marian shrine north of the Alps. Our Lady of Glastonbury was honored in an ante-chapel of the great monastery. At the Reformation the ancient image was burnt, but a representation of the image was discovered on a wax seal in a local museum, and when, in 1926, a Catholic Church was at last re-built in Glastonbury (just across the street from the monastic ruins) a new image was carved as a replica of the ancient one, and a new shrine to Our Lady of Glastonbury was erected. Pilgrimages are now ever popular to another of the ancient shrines to the Mother of God in England. Read more about the shrine here.
The pilgrimages include a procession with the image of Our Lady back into the Abbey ruins where Catholic services are held. The Anglo Catholics also have an annual pilgrimage to Glastonbury.
Glastonbury is also has connections with Joseph of Arimathea (he was supposed to have visited here with the young Jesus Christ during the silent years) St Patrick, St Bridget, St Dunstan and Bl. Richard Bere. Check out the tapestry in the shrine which pictures them. Not to mention the fact that the Abbey Church is supposed to contain the grave of none other than King Arthur.
PatheosDwight2007-05-09T15:17:00-04:00May 9th, 2007|Categories: Patheos|1 Comment