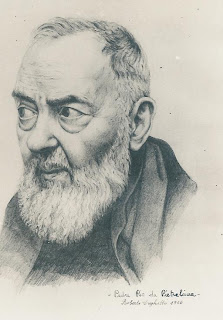 Padre Pio was asked what he thought about modern people who didn’t believe in hell.

“They’ll believe in hell when they get there.” he replied.

There’s pretty much packed into that little riposte, and what I like most about it is that the last judgement will be a time when things are stood on their head.

I’m reminded of one of the great judgement carvings which is on the South portal at Chartres. It is one of those scenes with Christ enthroned in glory, St Michael weighing the souls in judgement and the demons taking some below and angels lifting others up above.

I was visiting there and the old Englishman who used to give tours said, “Notice that both the damned and the saved have expressions of surprise on their faces.

So as you read this, ask yourself where you think you might go when you die and then stand on your head and check again.